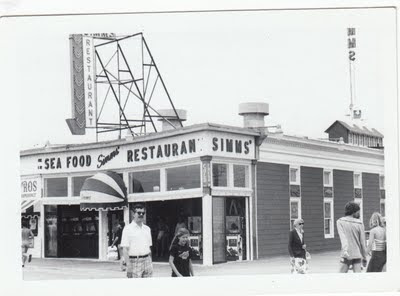 At one time there were dozens of family style restaurants in Ocean City, including the 21st. Street Restaurant (& Asbury Ave.), Watsons at 9th St. across from the Post Office, and among many others, Simms on the Boardwalk.

Simms served a set menu, but it was always very good and inexpensive. Then sometime in the late 70s early 80s, Roger bought it and made it a pinball arcade. I think that is when I took this photo, which seems to show the old Simms Restaurant signs but arcade games inside.

Roger, whose last name I can pronounce but can't spell, Jakobowaski - originally came from Camden, apparently investing his father's inheridance, starting off small, buying the traditional and longtime favorite Taylor Porkroll store, that had a unique mahogany paneling and counter.

It wasn't long before Roger owned a large part of the boardwalk and also the Jimminy Crickets bar and lounge on MacArthur Blvd. in Somers Point.

I don't know what happened to Roger in OC, but from what I understand he is now operating a bottled stream water company out of Upstate New York.
Posted by William Kelly at 9:24 AM